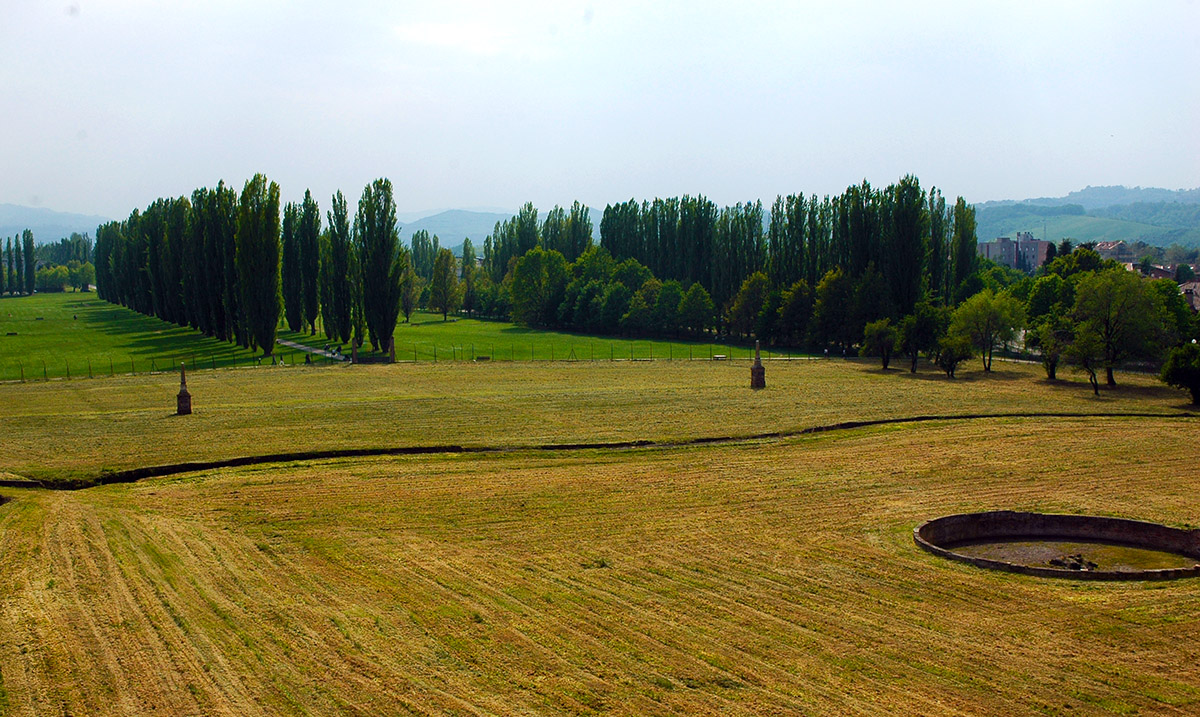 A majestic garden, which develops from the Palace and becomes the common celebration of the Duchy itself.

In the past long until 10 km, He was later marred in the 60s when a wild subdivision reduced it drastically.

Now we can see only a small part that is crossed by a straight that leads south to the area of ​​the Doge's Palace to the Belvedere with the hills as a backdrop.

Already with Pio speaking about this garden, but in the seventeenth century. that the park starts to change with the construction of the main fountains (1640-1654) ducal architect Bartolomeo Avanzini care on behalf of Francis I.

The fountains were connected to the Modena channel and for the part statuary we took out Bernini's designs.

A large terrace on the north side became a roof garden and from this people arrived at the secret garden reserved for private enjoyment of the dukes. The palace walls enclosing this garden were turned into stroll roof.

On the south side, at the entrance to the gardens, It was built the Peschiera, beautiful fountains theater.
A south, the garden was divided into 4 a square base parts decorated with box hedges, trees and pools. From here they departed two avenues, one directed to berlete (riparian zones hunting) Secchia, the other directed towards the hill.

A mid-eighteenth century, Francesco III with the building underwent a massive restructuring and under the guidance of Bezzi you arrive to link building and garden, up to that moment on different soil units.

Thanks to a system of terraces, caves, terraces and loggias the facade and the garden were finally united. He diverted the Modena channel, which until then it skirted the south side of the building and the space between the Palazzo and the channel staged a French parterre.

At the time, it was a central fountain and a detailed drawing arabesque. Moving away from the building, the faded garden in the park up to the incoltre areas, by Vallurbana towards the Secchia and then up to Casiglia and Marzaglia, where organized hunting parties. of the park area Buonaparte was in fact intended as a hunting reserve for the dukes and their guests, but the park turned out to be a real farm rather profitable.

Hercules III was also built the Riding, near Peschiera: a barn that can accommodate up to 102 cavalli. In 1780 circa, as a result of economic difficulties, Duke turned the park into 'country garden' taking for himself the French parterre.

The park now looks decidedly scaled.
E 'connected to the nature trail on the Secchia river through a cycle path on via Independence, and it is connected to Vistarino Park by a walkway made up of wooded area and a staircase, leading ina square Porrino.